Adopting a child with Down syndrome: “best decision we ever made”

Adopting a child with Down syndrome: “best decision we ever made” 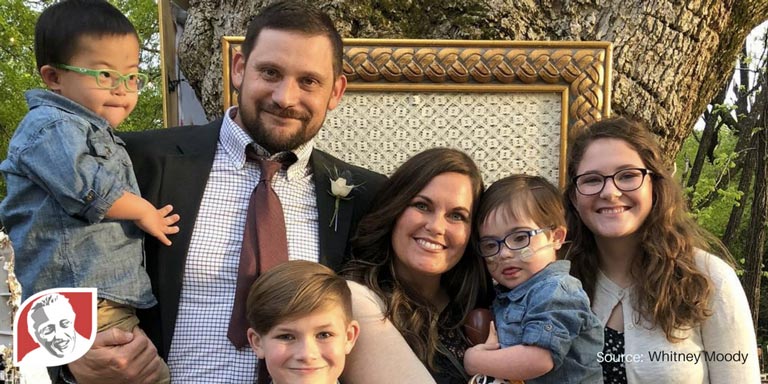 After they had their first two children, Whittney and Michael Moody struggled with infertility and multiple miscarriages. Just when they were about to give up, they learned they were pregnant with Jude.

Jude was diagnosed with Down syndrome shortly after birth, which the Moodys initially met with trepidation. But they soon learned that their worries were unfounded – as Whittney put it:

But then, as the months went by I began to learn that Down Syndrome was not this huge scary diagnosis that I had thought it was. I began to see the complete joy that Jude brought to everyone around him.

Then, when Jude was a year and a half old, Whittney and her husband began to think about adoption. Adopting a child with Down syndrome was not necessarily what they had in mind, but after meeting the Bazes, a family who adopted three little girls with Down syndrome, the Moodys realized that it was something they should consider.

A month later, they saw a picture of an adorable boy with Down syndrome on an adoption advocacy organization’s Facebook page. They contacted the agency he was listed with, and began the adoption process. After a long wait, Max was finally able to come home with the Moodys! Whittney says:

It was the best decision we have ever made for our family. The relationship between Jude and Max is absolutely amazing. I watch the two of them together and it brings tears to my eyes to see them interact. They are 3 months apart and I can see them growing even closer as they grow up…

People often tell me how awesome we are for adopting another child with DS. What they don’t know is how selfish a decision it really was. Jude is an incredible child who keeps us laughing, smothers us in kisses and hugs, and lives life so beautifully and innocently that we wanted more of that in our lives.

One of the questions I hate to be asked is did we know Jude had DS. Implying if we had known we would have done something about it. So in a way, I feel like our adoption of Max screams to the world we may not have had a choice with Jude, but we 100% had a choice with Max and we would do it a 1000 more times if given the chance.