Collin Clarke, bodybuilder with Down syndrome, is an inspiration

HomeBlogNewsCollin Clarke, bodybuilder with Down syndrome...

Collin Clarke, bodybuilder with Down syndrome, is an inspiration 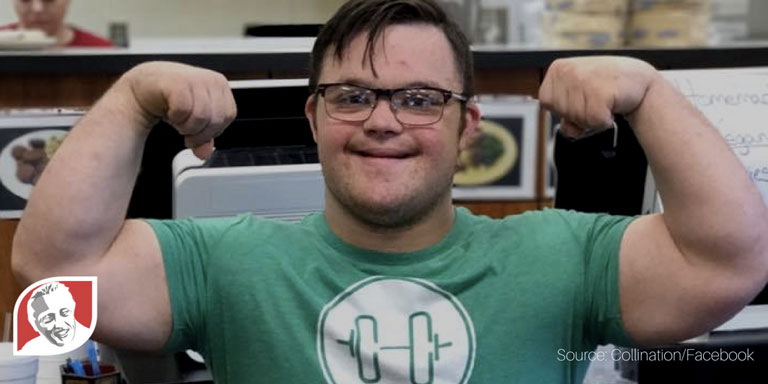 Collin Clarke hasn’t let Down syndrome stop him from becoming a bodybuilder. He was first inspired about three years ago while attending a bodybuilding show called Indiana Muscle. He decided that one day, he would be up on the stage.

At the time, Collin was 5-feet tall, but weighed 201 pounds with 37 percent body fat. He struggled with his weight, with depression, and was at risk for diabetes. He knew it was time for a change.

He started by changing his diet. He had a passion for corndogs, which he had to give up, says mother Jodie:

He enjoyed corndogs. Like, he had a daily thing where he would eat corndogs.

Six months later, he had lost 64 pounds and had only 7 percent body fat. Collin entered the Kentucky Muscle Bodybuilding Championship that fall. For him, being at the competition was a dream come true:

Being on stage is incredible. When you step on it, you get to feel the emotion of everything.

Collin’s goal is to continue to grow and improve in order to compete at the national level. Meanwhile, he has also become involved in exercise initiatives. He teaches at AceBuddies, an exercise class for kids with special needs, has developed the Five for Five program – a system of five exercises to do five times a week, and is the face of a nonprofit, Collination. Collin loves what he does:

A long time ago, I asked my mom about Down syndrome and how I can change who I am. But there’s nothing I can do about it. This is me, this is how I was born. So, OK I have it, but I don’t let it define me. I let it motivate me to work that much harder and show everyone that I can do anything.

I don’t do this for me at all. I put in the work and train, but I like to give back, you know? For the kids. I do it for them so they can help make their dreams come true. It’s about giving them an opportunity.