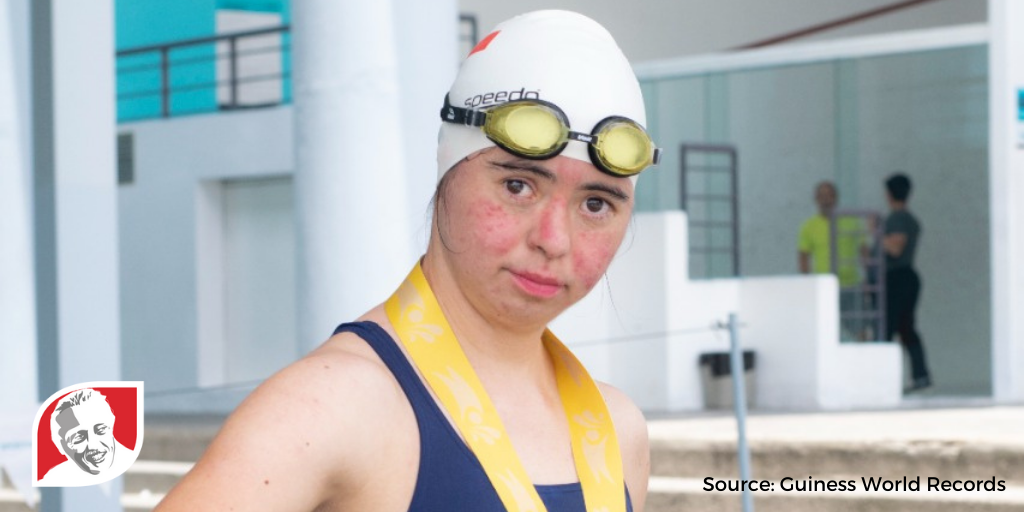 Earlier this month, Dunia Camacho, a competitive swimmer with Down syndrome, was awarded for breaking four Guinness World Record titles.

Born and raised in Mexico, Dunia is 33 and has been swimming for over 25 years. She has earned over 500 medals since she began competing, and was recently recognized for winning the following world titles:

Dunia has swum in variety of competitions in countries around the world – from Ireland to Venezuela. In a recent interview, Dunia mentioned that she has been inspired by other athletes whose stories encourage her to keep pursuing her dreams – namely, U.S. Olympic Gold Medal winner Michael Phelps. Not only is she showing the world what individuals with Down syndrome can do, but she also helps raise awareness about the Down syndrome community by working with organizations such as “Sports Union For Athletes With Down Syndrome (SUDS), Down Syndrome International Swimming Organisation (Dsiso), World Intellectual Impairment Sport (Virtus) and the Federación Mexicana De Deportistas Especiales, A.C. (Femede).”

“Dunia is an athlete full of enthusiasm for life. The support of her family, her coaches as well as her discipline and passion have been the key to her success.”

Winning these four record titles is not only a major accomplishment for Dunia, but it is also a historic moment for Mexico and for athletes with Down syndrome across the globe.