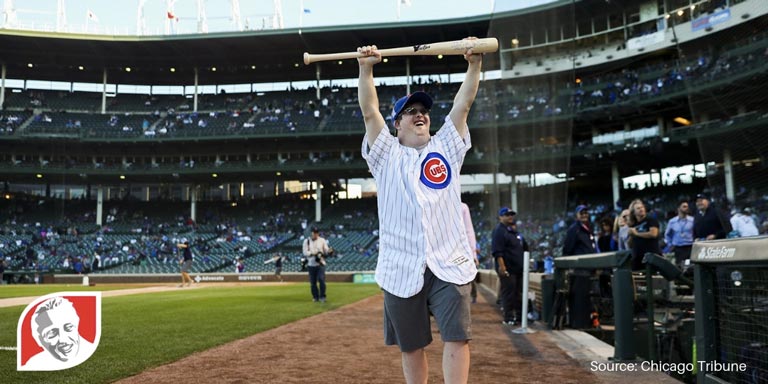 Stefan Xidas, a lifelong Cubs fan with Down syndrome, dreamed for years of singing the national anthem at a game. Inspired after singing at a White Sox game, he began writing letters to the Cubs thirteen years ago, asking if he could sing for one of their games as well.

After years of trying and getting nowhere, his friend Tom Molitor had an idea to make it happen. As a Special Olympian competing in tennis, the opportunity to fulfill Stefan’s dream while helping an organization close to his heart seemed like a natural fit.

Stefan was incredibly excited to sing at Wrigley Field:

I would say to Tom that I thank him from the deepest bottom of my heart. You are making my dream come true.

He sang this month as the Cubs played the Milwaukee Brewers, thirteen years after he wrote his first letter to the team.

He added that his singing will bring good luck to the team – after he sung at the White Sox game in 2005, they went on to win the World Series:

After I sing the national anthem, I told them that the Cubs will definitely go to the playoffs and they will win. I will make sure of it.