How Grace Strobel is shaking up the modeling industry

HomeBlogUncategorizedHow Grace Strobel is shaking up the modeling...

How Grace Strobel is shaking up the modeling industry 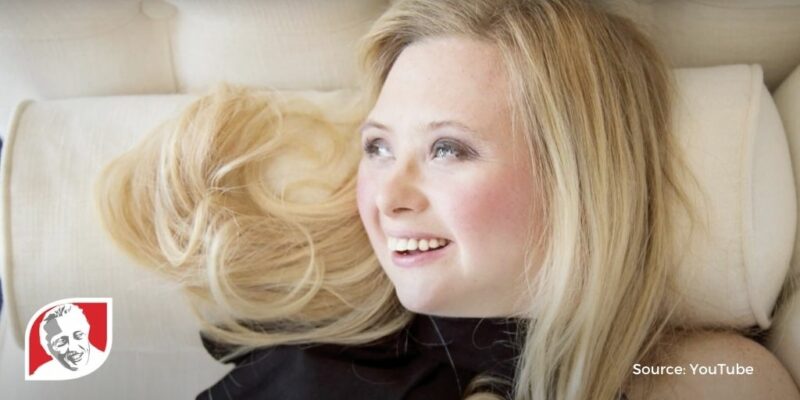 When Grace Strobel was born, doctors told her parents that her development would be severely limited because she had Down syndrome. They said she wouldn’t even be able to read, write, or tie her shoes.

24 years later, not only can she do all those things, but she is also a nationally recognized model who has signed with three agencies and appeared on the Today Show.

Her most recent photoshoot took place about a week ago, with a new clothing company called Alivia, which bases its prints on designs by people with disabilities.

Grace was in her element, saying, “It was exciting and fun. I love the dresses, and the whole shoot was a dream come true.”

Challenging Attitudes Towards Down Syndrome

Despite the fact that one in four Americans have some sort of disability, they are currently underrepresented in the fashion industry. A model with Down syndrome in a national or international fashion campaign is not something you see every day.

It certainly wasn’t something that was on Grace’s radar as a young girl. After a bullying incident in high school, Grace and her mother were inspired to do something to raise awareness and increase understanding about disabilities. Together, they began traveling and presenting “The Grace Effect,” a message about “overcoming obstacles, treating people with kindness and respect, and living with a disability.”

Together, they’ve spoken to 3,000 people at 100 schools around the country. Part of the “Grace Effect” presentation involves interactive activities that help simulate some of the physical difficulties experienced by a person with Down syndrome, such as imbalance, and impaired vision and fine motor skills. For example, Linda relates:

How it all began

When Grace and her mother were initially conducting research about Down syndrome for their presentation, they came across Ellie Goldstein, a model with Down syndrome who was recently featured in a campaign for Gucci mascara. Grace says:

I saw an article about Ellie, and I asked my mom if I could be a model. And she said “I don’t see why not! Let’s do this.”

In 2018, Grace had her first photoshoot. After her mom shared the images on social media, it went viral, and Grace’s career took off from there – suddenly, she had more invitations to speak than she could count. She ended up signing on with three modeling agencies, appearing in 14 different magazines, being featured in three cover stories, and speaking on the Today Show.

Most recently, Grace started modeling for Alivia when founder Jovana Mullins reached out to her after seeing her Today show appearance. Mullins has nothing but praise for Grace, remarking:

Grace is such an incredible woman and is paving the way for other women with disabilities. She’s showing the world how many abilities she has and the incredible things she can do.

Sooo excited to share these photos from my first @alivia__brand shoot ! And honored to be chosen as their first model 👠. This is the “Grace Dress”!! ~ 💙The fabrics are inspired by the expressions of creators with autism. This pattern was inspired by William Choi of NYC. His story in featured in my stories today. Alivia donates 10% of every purchase to @all.abilities – providing art therapy to youth and young adults with #autism 💙🖤💙 I’m so psyched to be working with Alivia and all the good they are doing! . . #kevinmurphyhair #stylediary #downsyndrome #ootdinspiration #heartthreads #diversityinmodelling #inclusivefashion

Nothing can slow Grace down. She tells Forbes, “I want to keep on modeling and speaking. And have people rethink what’s possible.”

Grace is proof that life with Down syndrome shouldn’t be a life with limits. At the Jerome Lejeune Foundation, we are committed to creating a world without limits for those with Down syndrome, celebrating their unique gifts, advocating for social acceptance, and offering medical care to help them live their best lives.

Actors with Down syndrome produce unique version of Romeo and Juliet

Parliamentary group launched to elevate the Down syndrome community