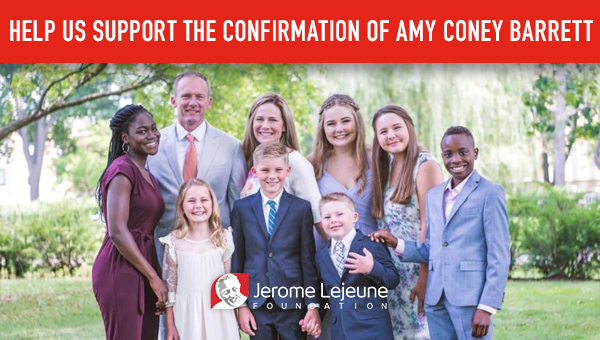 Judge Amy Coney Barrett, nominated by President Donald Trump to the U.S. Supreme Court, has sterling credentials and has fashioned an impressive legal career. She graduated at the top of her law school class, served a clerkship with Justice Antonin Scalia, fifteen years as a law professor at Notre Dame, and three years as a federal appellate court justice. A brilliant lawyer, she’s excelled at the highest level of law and the legal profession.

But having an impressive legal background is not what makes Amy Coney Barrett such a special nominee. After all, we would expect anyone nominated to the Supreme Court to have a stellar legal background.

What makes Amy Coney Barrett special is her character, and her life story.

Help Us Support the Confirmation of Amy Coney Barrett

Amy Coney Barrett is a mother of seven children. She has remarked, “What greater thing can you do than raise children?” And she has lived that truth to the fullest, demonstrating in the process the fullness of what it means to be pro-life. She is a 21st century feminist who works to secure both family and career, sacrificing neither.

Two of Amy Coney Barrett’s children were adopted from Haiti, sparing them a life of poverty and struggle. Her youngest, eight-year-old Benjamin, has Down syndrome. When faced with the knowledge during pregnancy that her unborn son would have a genetic disorder, she said yes to life.

Amy Coney Barrett understands the challenges that people with intellectual disabilities face. She also knows the joy children and relatives with Down syndrome bring to families, and to the world. She appreciates at a deep level the fact that those with Down syndrome are entitled to the same legal rights as others, starting with the right to life. They deserve the best individualized healthcare and scientific research a nation can offer.

As a judge, Amy Coney Barrett sought to review a legal decision invalidating an Indiana eugenics law that authorized abortion for, among other things, Down syndrome. The Jerome Lejeune Foundation USA filed an amicus brief in this case.

As a Supreme Court justice, she would bring invaluable knowledge and life experience in deciding cases that affect the rights of those with Down syndrome and other genetic disorders.

I cannot imagine a better advocate for those with genetic disorders than Judge Amy Coney Barrett. Along with the recent appointment of JLF USA board member Daniel Schreck to the National Council on Disability, our community will have two influential and immensely effective advocates in government fighting for our rights.

We Need Your Financial Help to Confirm Amy Coney Barrett

The Jerome Lejeune Foundation strongly supports the confirmation of Judge Amy Coney Barrett to the Supreme Court. We are working on educating and informing the American people about just how special this nominee is, mobilizing them to contact their senators in support of her confirmation. At a time when she will be under unrelenting, bitter attack by special interest groups, we have an opportunity to show her humanity, her love for life, and her support for our community.

This is an incredible opportunity, but we need additional funding to execute our plans. Will you help us by making a contribution today? In honor of Down Syndrome Awareness Month, a generous donor has agreed to match all donations up to $50,000.

This is an amazing opportunity for the Down syndrome community, and for those who care about individuals with genetic disorders such as Down syndrome. I invite you to help us to effectively educate the American people about this special nominee, and to advocate for her confirmation to the Supreme Court.