An interview with actress Lauren Potter: opening doors for actors with Down syndrome

An interview with actress Lauren Potter: opening doors for actors with Down syndrome 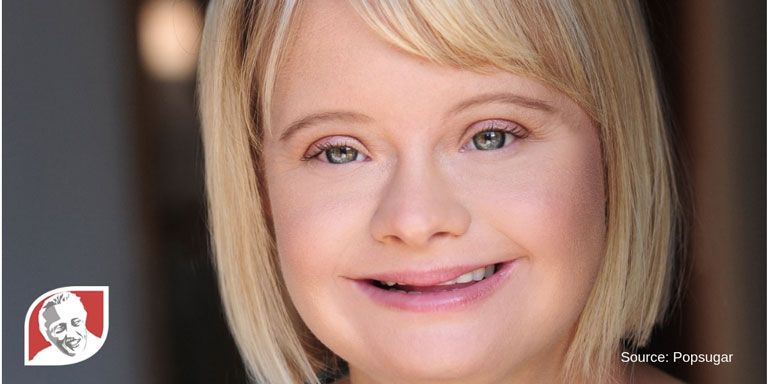 Lauren Potter dreamed of becoming an actress when she grew up. But as a young girl with Down syndrome, she had even more barriers preventing her from reaching her dream.

However, she didn’t listen to those who told her she couldn’t make it, and in 2009, she was cast as cheerleader Becky Jackson on the TV shoe Glee. She played the role of Becky until the show’s end in 2015, as well as guest starring in other shows, including Veep and Switched at Birth, and appearing as a motivational speaker around the country.

In a recent interview with Popsugar, Lauren discussed her acting journey, and the importance of fighting against discrimination of those with Down syndrome:

POPSUGAR: Growing up, how did you handle people telling you that you wouldn’t be able to have the dream career you wanted?

PS: Did you always know you wanted to be an actress? How did you go about making your dreams come true?

LP: Yes, absolutely. I performed all the Disney movies for my family and friends, and I also knew all the Disney songs and dances. I don’t sing well, but I love to sing a lot! I just knew I wanted to act. I started dance classes when I was 3 and just loved performing. I knew then that acting was the career for me.

PS: What’s one obstacle you’ve overcome in your career that you’re really proud of?

LP: I’m really proud that I have Down syndrome and have been able to grow as an actor and show the world that Down syndrome doesn’t stop me, and that I think I’ve become a really good actor. And I think I have some part in opening the doors for other actors with disabilities.

PS: What advice do you have for someone else with a disability who wants to have a career and follow their dreams?

LP: Well, don’t ever give up your dreams, no matter how hard it is or how impossible it seems! I want all people with or without disabilities to follow their hearts, follow their paths, and never give up their dreams. I hope I am proof that it can happen!

PS: What do you want employers to know about people with Down syndrome applying for jobs?

LP: Employers should know that they will not go wrong hiring a person with Down syndrome. Not only will they be helping someone reach their goal of working, but they and other employees will learn so much about acceptance and love. Everyone I know with DS works hard and gives 100 percent of themselves. We’re all more alike than different!

PS: What’s your advice for how directors/producers/casting directors can make the entertainment industry more diverse and inclusive?

LP: I always say, think outside of the box (my mom taught me that) and give us a chance. You will not be disappointed. I want to be seen as an actress first, then as a really good actress who happens to have Down syndrome. But just because you have DS or some other different ability, that doesn’t make you a good actor, you have to work hard and prove you can do it. I just want to be seen as the best actor for the role because I’ve shown I have what it takes.

LP: I think people think that we are different with different feelings, but we are WAY more alike than different. I want what everyone wants: to be accepted for me, to have friends, to love someone, and have someone love me, to live independently, to work at my career, to have family and friends around me, and to enjoy living my life.