HomeBlogNewsMcDonald’s worker with Down syndrome... 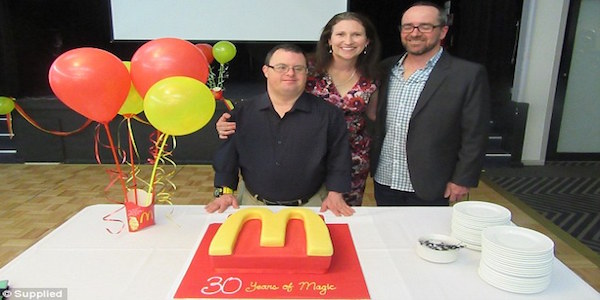 Daily Mail Australia reported the wonderful story of Russel O’Grady, a McDonald’s worker with Down syndrome who has been delighting customers at his local McDonald’s for the past 30 years.

Russell O’Grady, 48, first donned the fast food restaurant’s uniform in 1986 when he was just 18-years-old. Now, 30 years later, he is a local hero at Northmead McDonald’s, in Sydney’s west.

His father, Geoff O’Grady, told Daily Mail Australia his son had become ‘the best-known person in Northmead’ since he started working at McDonald’s.

‘People stop him on the street and shake his hand,’ Geoff said.

‘He’s very affectionate, dearly loved and appreciated, to such an extent that we just don’t believe it.’

Geoff said he was ‘extremely proud’ of his son, but never thought the community would embrace him in the way it has.

Customers love him just as we love him,’ he said.

Geoff said his son’s career has given him a different outlook on life.

‘Somebody said to him “are you handicapped?” and his answer was “I used to be when I went to school, but now I work at McDonald’s”,’ he said.

‘Because other people who work there are normal, he assumes he is now too.’

Russell’s career began with work experience, but when he proved himself a good worker, he moved into a secure job with McDonald’s packing party boxes.

He also tried his hand at other duties in the restaurant, even trying his hand in the kitchen.

Geoff said the staff at Northmead McDonald’s accepted him with open arms, and made Russell’s work life more enjoyable than he thought possible.

‘These people are absolutely fantastic, if it wasn’t for their attitude he wouldn’t still be working,’ he said.

‘You feel happy that you have him here, he’s just nice to have around,’ she said.

‘He’s really sweet, he always comes up to me to shake my hand hello and goodbye without fail, just a really sweet gentleman.’