Meet Amy Bockerstette: the first person with Down syndrome to compete for a NCAA title

Meet Amy Bockerstette: the first person with Down syndrome to compete for a NCAA title 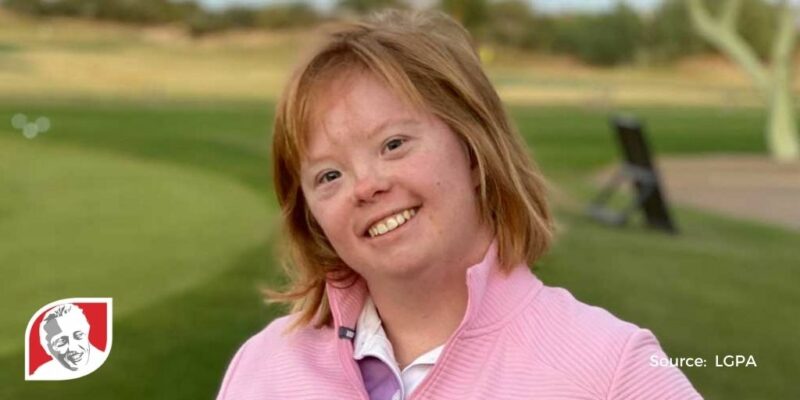 This week, Amy Bockerstette became the first person with Down syndrome to compete in a national college championship event when she golfed at the National Junior College Athletic Association National Championship at Plantation Bay Golf & Country Club in Ormond Beach, Florida.

At just 22 years old, Amy already has an impressive array of accomplishments to her name. In 2019, she became the first person with Down syndrome to receive an athletic scholarship. Now, she is in her third year on the Paradise Valley Community College golf team and loving it. Before this week’s tournament, she told Today:

“I love playing, my teammates, my best friends, seeing each other. We have a good time.”

Amy first rose to prominence after a clip of her golfing with pro player Gary Woodland went viral. She left quite the impression on Gary, who went on to win the U.S. Open and then surprised Amy on the Today Show. Gary shared:

“We had a special day there in Phoenix and it’s blossomed from there, but the world needs a lot more of Amy. Her attitude, her energy is contagious. I thought a lot about you on Sunday. I think a lot about you every day, so thank you.”

How a superstar named Amy teamed up with @GaryWoodland to win the hearts of the 16th hole crowd @WMPhoenixOpen.#LiveUnderPar pic.twitter.com/iRhZbvdjuP

Inspiring people with Down syndrome to shatter expectations

Her parents founded the I Got This Foundation in her honor, with the goal to “promote golf instruction and playing opportunities for people with Down syndrome and other intellectual disabilities.”

Their hope is that others can be inspired by her can-do attitude, and that parents who have children with Down syndrome are encouraged to be advocates for their kids. Amy’s father remarked:

“Don’t put limits on your child with a disability. They are far, far more capable than you can imagine.”