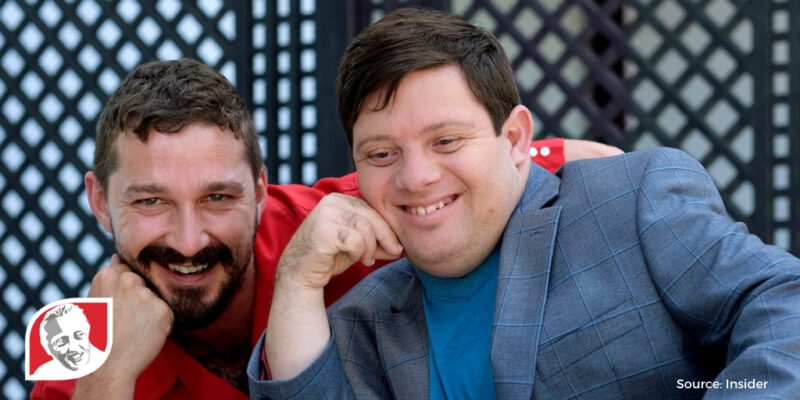 In a recent interview with Cathy Newman of Channel 4 in the UK, actor Shia LaBeouf got real about his struggles and how Zack Gottsenhagen helped him turn his life around. Zack, who has Down syndrome, co-stars with Shia in a new film called “The Peanut Butter Falcon.” Working with Zack was a unique experience for Shia, who told Cathy:

I had never worked with an actor like him. I’d never been involved in a project like this. It felt like it was going to be a really freeing experience, and to be quite frank, I was terrified. I knew that he’d be playing lead guitar, you know, and I’d be playing bass to him. If he went left, I’d have to go left. I’d never been in a situation where so much is dependent on staying open, and reacting, and listening to another performer. I’ve been quite selfish in my choices and my way of working before.

The kid in me died and I just got over all this. This roller coaster wasn’t fun after a while. You ride the same roller coaster, it just loses its appeal. Then you go on it with someone who hasn’t been on it before, and somehow, it sparks back up.

During the time the movie was being filmed, Shia was arrested for disorderly conduct and public intoxication, and Zach encouraged him to be a better person. In an interview with Esquire magazine, Shia remarked:

To hear him say that he was disappointed in me probably changed the course of my life. Cause I was still fighting … Just on my defense-mechanism-fear garbage. And you can’t do that to him. He keeps it one thousand with you. … Zack can’t not shoot straight, and bless him for it ’cause in that moment, I needed a straight shooter who I couldn’t argue with.

Shia also reflected on the incident in his interview with Newman, remarking:

The day after I got arrested, we were on a boat. I couldn’t really look at anybody in the eye. I was sitting next to him, and he put his hand on my shoulder, and like, nursed me back on a boat during the scene where we’re talking about the painful past. That stuff hurts; that stuff hurt to go through and to feel.

Shia related that Zack was unafraid to call him out, telling him, “You’re already famous. This is my chance. And you’re ruining it.”

“I was sad. I cried,” Zack told Newman, “But I’m still gonna take that chance for myself, to give Shia one chance to prove to himself never, never, never do this kind of stuff again.”

“The Peanut Butter Falcon” has already made nearly $20 million in the U.S. You can watch the trailer below.