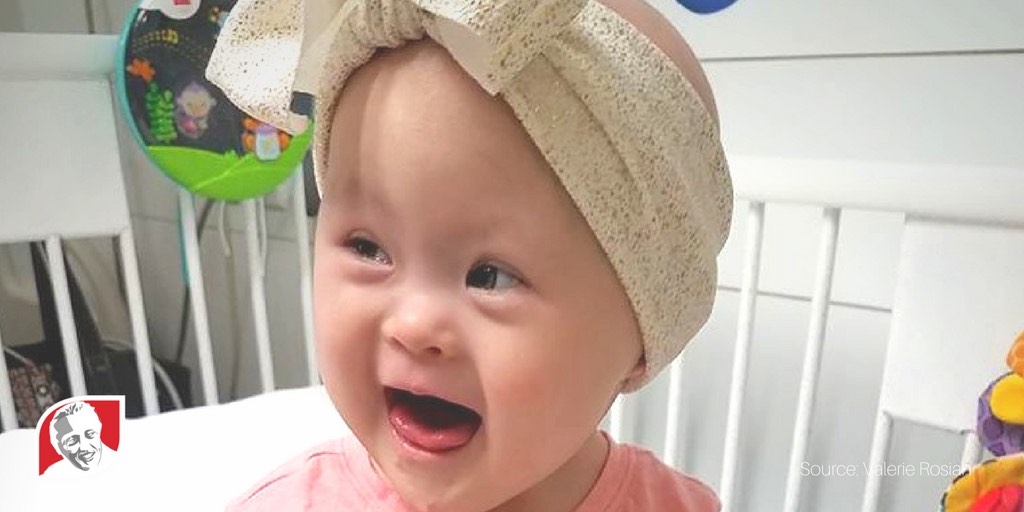 Grace Rosian has been a fighter from the beginning; she gets it from her mother. Valerie Rosian gave birth to Grace via emergency C-section, and almost lost her life after going into cardiac arrest. But that was just the beginning of the fight for the Rosians.

After Grace was born, doctors informed her parents that she had Down syndrome as well as a form of leukemia. Valerie describes her reaction to finding out her little baby had cancer:

We were shocked. I don’t think I’ve ever had such a hard punch in the gut.

She was a little over four pounds, and getting chemotherapy at 2 days old. I did a lot of crying and a lot of praying.

Grace was in remission after two months of cancer treatment and was able to come home. However, last August, the cancer came back, and was more aggressive:

She got really sick. She started to lose her hair and got sores. She’d have really bad vomiting and diarrhea. It felt like I was carrying a weight on my chest. On her pictures for her first birthday, it hurts my heart to look at them. We tried so hard to make it special for her, she was so sick. She looked so sick.

Grace went through five more rounds of chemotherapy over a course of seven months, staying in the hospital constantly. On March 21, which is coincidentally World Down Syndrome Day, Grace was declared cancer-free and returned home!

Her mom says she is thriving, and shared on Facebook that she is excited to see her rolling, getting new teeth, and just having a chance to be a normal kid:

Even when she was sick, she always had a smile. She’s always been a very peaceful, happy, talkative little girl. She’s a wonderful baby.

SCOTUS nominee & Down syndrome – What you need to know