Vice President Pence Speaks for Children with Down Syndrome

Vice President Pence Speaks for Children with Down Syndrome 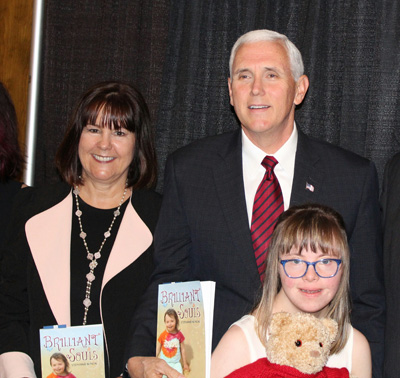 Vice President Mike Pence’s strong support of the protection of each and every human life, from conception to natural death is widely known. He recently visited Grove City College in order to give a commencement speech, during which he spoke for the vulnerable in our society, urging the students to take a stand for those who cannot defend themselves.

I can’t tell you how proud I am to be Vice President to a President who stands without apology for the sanctity of life and all the God-given liberties in the Constitution of the United States.

However, above and beyond his awareness of the sanctity of life, Pence has a special place in his heart for people with Down syndrome. Prior to giving his address at Grove City, Pence paid a special visit to Chloe, a beautiful little girl who has Down syndrome. Chloe’s father, a blogger for Renew America, writes:

Prior to delivering his Grove City address, Vice President Pence and his wife Karen took time out of their very busy schedule to meet privately with my amazing daughter Chloe who was born in 2003 with a diagnosis of Down syndrome. Shortly after Chloe’s birth I learned that there was a prenatal genocide being waged against these beautiful children with 90%+ in some regions being identified, targeted and terminated in the womb for failing to meet the cultural mandate for perfection. When Vice President Pence was Governor of Indiana he recognized this prenatal eugenic movement and signed legislation to stop the slaughter of children like Chloe who bring incredible joy, love, purity and light to the world.

Many in our society claim to be supporters of individuals with Down syndrome and talk about inclusion, diversity, tolerance and acceptance while never addressing the unborn holocaust of these awesome children once they receive a diagnosis. Prenatal testing coupled with the instrument of abortion represents the most extreme form of prejudice, profiling, intolerance, exclusion and eugenics, and in some cultures Down syndrome termination is 100%. As prenatal tests rapidly advance unlocking more traits our culture labels defective or undesirable, we all need to ask who will be the next victims of this silent genocide?