Why the mom with “one-in-a-million” twins chose life

HomeBlogNewsWhy the mom with “one-in-a-million” twins...

Why the mom with “one-in-a-million” twins chose life 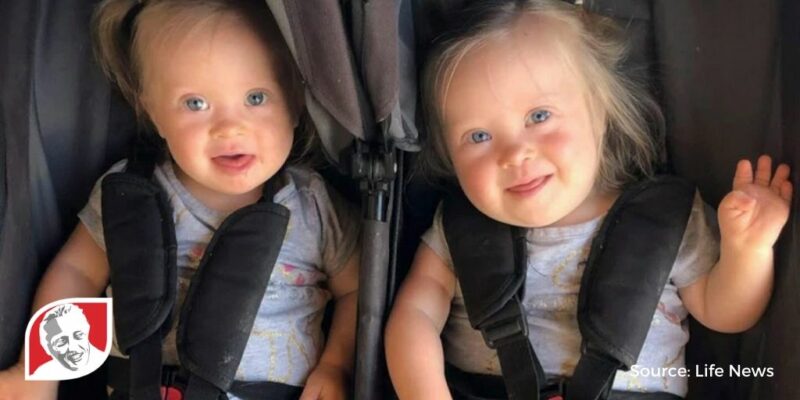 Two months into her pregnancy with twins, Rachael Prescott found out there were abnormalities indicative of Down syndrome. The odds of having twins with Down syndrome are estimated to be one in a million – and while Rachael considers her girls to be “little miracles,” doctors repeatedly urged her to have an abortion. Although her twins also had serious heart defects, the doctors bizarrely focused more on the possibility of terminating the pregnancy than addressing how their heart problems could be helped. Rachael remarked:

At my first prenatal appointment at around eight weeks, six specialists took turns reviewing the scans and presenting the same results. We sat through similar spiels from each, mystified at their concerns over whether our girls may have Down syndrome, when they without a doubt, did have serious heart defects. Information on navigating their cardiac situation was dwarfed by the push for genetic testing and possible means of abortion. I wanted to explain how far I was from desiring to end my pregnancy, but at that moment I could only sit in silence.

Rachael chose to forgo additional testing – and she and her husband were overjoyed when their two little girls were born safely. Others didn’t quite understand their reaction to having two girls with Down syndrome, according to Rachael:

When they were born, we celebrated the news of a confirmed diagnosis of Down syndrome. Doctors usually suggest that twins are born by c-section because it can be risky, but our prayers had been answered for a natural birth and two babies not needing to be rushed away to an operating table.

We were so grateful and relieved. Those surrounding us however, approached the topic of Down syndrome with timidity. It was assumed that we were grieving, but we quickly assured them [of] the lack of sadness or grief in our hearts concerning our beautiful, breathing, moving, hearts beating, baby girls, and their extra chromosomes.

When she sought to learn more about Down syndrome, Rachael was taken aback by the number of negative assumptions about the feelings of parents with Down syndrome:

I read book after book on Down syndrome, and I was increasingly saddened to find myself slammed into chapter upon negative chapter of advice regarding grieving, social and family tolls and every probable medical complication under the sun.

I realized even within our rapidly progressing society, human rights for people with Down syndrome are primitive at best, and medical professionals connect social prejudices to Down syndrome so it presents as a negative occurrence to parents.

Now one year old, the twin girls, named Annette and Charlotte, may be developing more slowly than a typical child without Down syndrome, but they share so many of the same joys and milestones as any other baby. “Our girls teeter around, taking their own steps, giggling and exploring every inch of our living room.” says Rachael. She hopes that her story will help illuminate the joys of having children with Down syndrome:

Witnessing this bond, between all of my children as they learn and grow, is my favorite part of being their mother but in these first two years, we’ve become aware of the negative stigma towards Down syndrome. The stories of mourning and grief far outnumber parental accounts of delight and joy.

We hope in the future, to direct expectant parents away from false preconceptions, and towards what we have found to fill us with so much joy.

Rachael has never regretted her decision – “I would still undoubtedly, choose my children just as they are.”